This is the third installment in a continuing series calling out songs that should be in every horror fan’s running (or exercise) playlist. For this edition, it’s about the classics. I’m returning the the days of my youth and three songs that pay homage to the monster classics that I cut my teeth on.

As a youngster, I spent many Saturday afternoons in the darkened Riviera Theater on Lake Avenue in Rochester, NY watching monster matinees that featured everyone’s favorite Tokyo-destroying / defending nightmare Godzilla. I loved those afternoons. That’s just one of the reasons I love this song. BOC was at the height of their powers with this funky novelty piece; just an awesome tune. Maybe that’s why bands like Fu Manchu, The Smashing Pumpkins and Racer X have covered it. Imagine yourself running from the great Godzilla’s earth-shaking footfalls for an extra kick to the workout.

This early 70’s jazz-influenced rocker is an awesome take on bringing Mary Shelley’s gothic monster to life and Edgar Winter himself looks like something out of a dark fantasy. From the album “The Only Come Out at Night.” Feel the electricity!

10 years ago this month, we lost a true genius in the world of Rock and Roll with the passing of Warren Zevon. Though he battled his own demons and at times his songwriting suffered, when he was “on,” few could touch him (“Desperadoes Under the Eaves” is a simply FLAWLESS composition with some of the best lyrics ever written.) “Werewolves of London” is the song he is best known for and it’s no secret why. The undeniably catchy piano progression that the song is built around anchors a delightfully morbid tale that juxtaposes suave werewolves in everyday situations with their victims, mutilated and torn asunder. Annnnd… A mention of the great Lon Chaney of “London After Midnight” (plus countless others) and “The Wolf Man” himself, Lon Chaney Jr. Pure fun!

How can you follow Screamin’ Jay Hawkins? Really, there’s only one cat cool enough to take the stage RIGHT after… The great Alice Cooper. 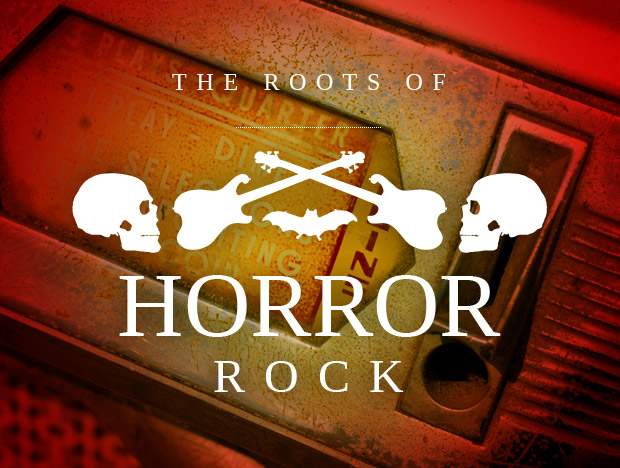 Neé Vincent Damon Furnier, in Detroit Michigan in 1948, this artist took the beginnings of horror rock from Screamin’ Jay and opened the doors wide.

Throughout his six decades in the music business, Alice Cooper has done an incalculable service for horror rockers and for the horror genre itself. With a stage show that includes guillotines, prop blood, real boa constrictors, electric chairs, MORE prop blood and baby dolls, how could we not pay homage to this man? Rolling Stone has referred to him as “the world’s most beloved heavy metal entertainer” and I have to agree.

Check this out. Still awe-inspiring after decades!

(Thanks to Fulton Pub for the AWESOME live vid.)

Cooper’s trademark look and makeup was inspired by the worlds of film and TV. He drew inspiration originally from Bette Davis in “What Ever Happened to Baby Jane.” Then, he saw “Barbarella.” Cooper said of the look, “When I saw Anita Pallenberg playing the Great Tyrant in that movie in 1968, wearing long black leather gloves with switchblades coming out of them, I thought, ‘That’s what Alice should look like.’ That, and a little bit of Emma Peel from ‘The Avengers.'”

Here he is with the amazing Vincent Price and a song from “Welcome to My Nightmare.”

A legendary image built on horror.

For all of these years, you have continued to entertain and shock us, Mr. Cooper. A boa’s embrace for all of the chills.

Horror rock: Talk about a sub genre. I thought I would expand on my recent Bauhaus tribute and do a short series featuring the artists at the very roots of horror rock.

Really, there’s no better place to start than the inimitable Screamin’ Jay Hawkins.

Hawkins, neé Jalacy Hawkins, was born in Cleveland in 1929. Though many may credit other sources as the wellspring of horror rock, Screamin’ Jay is it. This is the bedrock.

Hawkins is the bedrock and his song “I Put a Spell on You” is the starting point for the genre. Originally recorded in 1956, it was the first foray into the psychotic world of dark rock and roll in the theatrical sense that we think of horror rock today.  The Rock and Roll Hall of Fame picked it for its listing of “500 Songs that Shaped Rock and Roll.”

Here is a haunting version from 1972 from Hawkins that was used to great effect in “American Horror Story.”

In the legendary recording session for this song, the band was roaring drunk and Hawkins was literally blacked out when he laid down the track. The result was a guttural, grunting masterpiece that, while banned on many radio outlets of the day, surpassed a million copies in sales.

Soon after, proto-rock-DJ Alan Freed paid Hawkins $300.00 to emerge from a coffin to kick off a live performance and the great tradition of dark horror rock props was born. Hawkins soon added foppish costumes and several other horror-driven elements to his shows including “Henry,” a smoking skull character that accompanied him wherever he appeared. in many ways, he embodied the idea of a cartoonish, black Vincent Price.

It all starts here, folks. Represent for Screamin’ Jay. Turn it up!

This is the second installment in a running series calling out songs that should be in every horror fan’s running (or exercise) playlist. For this edition, we’re turning to the undead. Really, there’s nothing like a zombie to get your pace up.

On with the dark tuneage. All “Zombie” songs this time ’round  ::

Ultimately, a song about Ireland’s politically charged violent history, but few songs have charted like this one with such an “undead” moniker. Though it was different in relation to the band’s other output, IMHO, it represented a high point for them. Really, how could I have a “Zombie” installment of this playlist and not include this? In another really cool tie to things dark, the video for the song was directed by the great Samuel Bayer. He directed countless music videos including Nirvana’s dark piece for “Smells Like Teen Spirit” and helmed the 2010 remake of “A Nightmare on Elm Street,” acting as both director and producer for the film.

“All You Zombies” — The Hooters

This has a nice tempo to it. Perfect for settling into a distance pace on. This 1985 hit from “Nervous Night” charted at #58 on the Billboard Hot 100 annnnnd it’s zombified. Sweetness.

Let’s pick up the pace again with this one — a guitar driver from 2011’s “”Hard Times and Nursery Rhymes” — one of the best albums of that year. I love these cats. Rock on with your brain-loving selves.

Though many bands may have darker, more overt horror-driven themes, I don’t think ANY have captured the essence of a gothic sense of horror better than Bauhaus.  From the angular, vampire’s strut and croon of Peter Murphy to the dark and often sparse artistic vistas of their instrumentation to the gothic thematics of their lyrics, it’s all here and it’s all awesome.

Who can forget the band’s inclusion in Tony Scott’s lush vampire masterpiece “The Hunger?” An incredible example of the band’s power and one of my fave credit sequences of the era.

( PS — All of you haters of that film can go home, because I think very few films captured the vampire story in as interesting a way as “The Hunger.” RICH and stylish as hell. Tony Scott definitely had a look here and Stephen Goldblatt was DP on this as well. Awesome look.  )

Honestly, that legendary song, “Bela Lugosi’s Dead,” would be enough to earn them a permanent place in the annals of horrordom, but it was the total package here that carried so much appeal. All of it.

This is “Kingdom’s Coming,” another tour de force from the band that was included on the soundtrack album for “The Blair Witch Project.”

So gorgeous, so gothic with that dark sense of foreboding communicated in only the best works of horror of any kind.

I know the band might sigh at a tribute on a dark blog like this as so much of their output was about love and more hopeful themes (and I loved that work as well), but they have given lovers of the gothic a body of work that stands alone in so many ways. My only hope is that the youth of today will look back occasionally to see a band like Bauhaus for what it has given to shape the music of today’s dark edge.

(I found the above band pic on this blog about the goth scene of the golden age. Check it out. Really amazing site.)

Fear is a motivator. No question. I love to run and I love music that moves me, even through that sense of fear or the devilish grin at a dark tune in my ears.

I’ll be periodically sharing songs for horror lovers to add to their running (or exercise playlist) to get the blood pumping. This is the first installment ::

I HAD to start with this one. HAD to. IMHO, this is the granddaddy. For starters, I loved these films and the soundtracks were a huge reason why. When I run to this, I can not help but imagine the truly desperate thrill of survival coursing through me as I sprint, barely ahead of the slavering undead fast on my heels. Awesome.

HORROR TIE :: Built on direct samples and base music from the zombie classic “Day of the Dead.”

This is awesome all the way ’round. The VERY direct ties to Romero’s masterpiece alone makes this sweet, but the band amped it up  a ton and gave it a flavor both urban and punk. Love it.

“Every Day is Halloween” — Ministry

An electronic / goth shoegazer from my late high school / early college period. This one is perfect for maintaining pace. Even, awesome rhythms and goth thematics. Fun.