Emily Dickinson is a master of the dark. Yeah, you heard me… Emily Dickinson. Simply put, her fascination with and expression of death’s gothic embrace places her soundly in the great cannon of horror. I know some may recoil at this characterization, but I absolutely LOVE her work and think it very fitting to pay homage to her here. 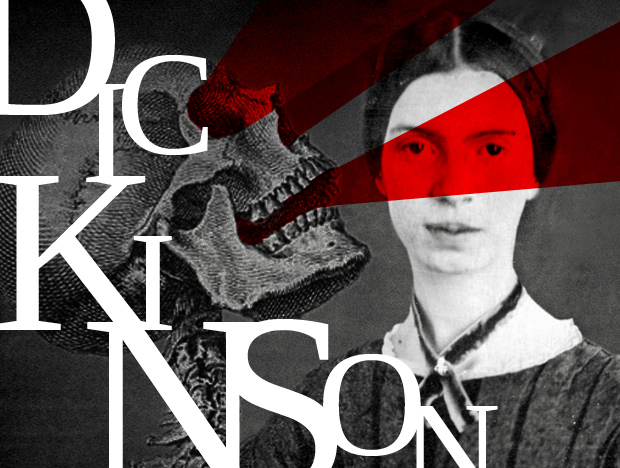 Only a select few have given us the sinew and bone of language that Dickinson shows in her poetry and I feel strongly that we see that muscularity at its finest when it explores death and its release thematically in her work. The poems move, challenge and inspire even after repeated readings. The images, so often dark and ringed with the steely edge of fatality and finality, dance and play with unmatched touch.

Look at this incredible example ::

That after Horror—that ’twas us—

That after Horror—that ’twas us—
That passed the mouldering Pier—
Just as the Granite Crumb let go—
Our Savior, by a Hair—

A second more, had dropped too deep
For Fisherman to plumb—
The very profile of the Thought
Puts Recollection numb—

Good GOD, the language. The dark beauty. The “metallic grin” of Death, drilling his welcome in from the last stanza is nothing short of stunning. In many ways, she manages to presage in just a few words the biomechanical horrors of HR Giger’s brilliant oeuvre in image, but imbues it with a devilishly welcoming presence. AND, she did it in the mid-nineteenth-century.

Because I could not stop for Death–

Because I could not stop for Death–
He kindly stopped for me–
The Carriage held but just Ourselves–
And Immortality.

We slowly drove–He knew no haste
And I had put away
My labor and my leisure too,
For His Civility–

Or rather–He passed us–
The Dews drew quivering and chill–
For only Gossamer, my Gown–
My Tippet–only Tulle–

Again, amazing. I almost feel that to say too much is to take away from the work itself.

And from the “Totally Epic Things That Will Never Happen” file, I fantasize about an album where total metal masters Baroness take Dickinson’s work and interpret it through song. Holy crap, talk about too much awesome. Hey, a boy can have his fantasies, right? Listen to these and imagine her work interpreted in this way ::

Boys, if you’re listening out there, help a brother out and consider at least one track like this. (PS — I saw your show at The Firebird here in St. Louis and I’m still riding on a musical high from it. Keep it up!)

I think the obituary that Susan Dickinson wrote about her friend summed Emily’s talent best :: “A Damascus blade gleaming and glancing in the sun was her wit. Her swift poetic rapture was like the long glistening note of a bird one hears in the June woods at high noon, but can never see..”

Emily, thank you for the rich, dark heritage you have left us.

The 19th century gave us some of the most indelible images and stories of the horror genre. The monsters and men set forth in the books of that era continue to haunt us today and form the basis for our modern scene.

As I have mentioned, I am a designer by trade and I love to play with personal projects. I thought I would share a concept that I have been working on to pay homage to the great horror masterworks of the 19th century. I’m calling the project “A Century of Horror Classics.” I have designed and illustrated shirts representing 7 incredibly seminal works from that era. Here a list of the works in chrono order ::

Annnd… Here are the designs in an order I thought presented well for the blog ::

Drop a line and let me know what you think of these. I know I will wear them in honor of the horror greats they represent.

What better way to kick this blog off than with a tribute to a true legend of imagination and movie monster magic?

May 7th of this year, we lost a true legend in Ray Harryhausen.

From the original Mighty Joe Young (1949) to his first color film, The 7th Voyage of Sinbad (1958) to the incomparable Jason and the Argonauts (1963) to his last film, Clash of the Titans (1981), he gave us so many truly memorable movie monsters. His work still inspires me as a digital artist today. I feel so strongly that for all of our capabilities in the digital space, Harryhausen’s work retains a tactile quality, a “realness” that remains absent in so much of what we see in today’s over-juiced CG blockbusters. In short, the scenes have SOUL because his hands were in everything he did.

I had the distinct pleasure of seeing Mr. Harryhausen person here in St. Louis a few years ago at a special screening of Jason and the Argonauts with the Webster University Film Series. It was a magical night and  as a fan, it was so incredibly gratifying to see Ray get a standing ovation after each effects sequence in the film. He was humble, relatable and undeniably awesome.

Who can ever forget the work on Talos in the Argonauts? It still gives me chills.

Annnd, the work on the final skeleton fight scene in Argonauts is just incredible. I attended the evening with a good friend and talented animator who remarked that the all the scene needed was some motion blur and it would be completely viable as a contemporary effects scene. I couldn’t agree more. WATCH THE SCENE and think about the fact that they had to choreograph the actors and hand-animate to that action. Matching the two with that limited technology is simply astounding, yet it is done SEAMLESSLY in this scene. Truly amazing.

That wouldn’t be easy to do today, but he did it with models, one frame at a time. Multiple camera angles. Integration with very fast-live action. Variable terrain. All quite seamless. It really is almost a feat of true conjuring.

Ray, you will be missed. Thank God you have left us with so much work to continue to go back to for inspiration and wonder. I know I will always return with a child’s smile.