I wanted to start reviewing all of the horror films I am seeing sequentially on this blog, but thought a great place to start is to catch up with reviews of what I have watched so far in 2013 from the genre. Many are older, some new. Really… I just love exploring new-to-me films of any time period or re-experiencing films from my past that I may have seen and wanted to watch with a fresh (more mature) pair of eyes. I’ll capture all of that here through these reviews.

In a bit of convergence with another personal project I am working on, I will also share movie posters I have created for each film after watching it. For that project, I create a poster for every film I watch (every film… regardless of genre) of no more than three colors (black, red and white) and as few design elements as possible that captures the essence of the movie. You can see all of the posters at the project’s site here ::

The posters themselves have no critical aspect to them, but this blog will allow me to explore the films from the horror genre critically.

Again, for the next posts along these lines, I’ll be playing catch-up for 2013 so far. Without further ado, here are a few… 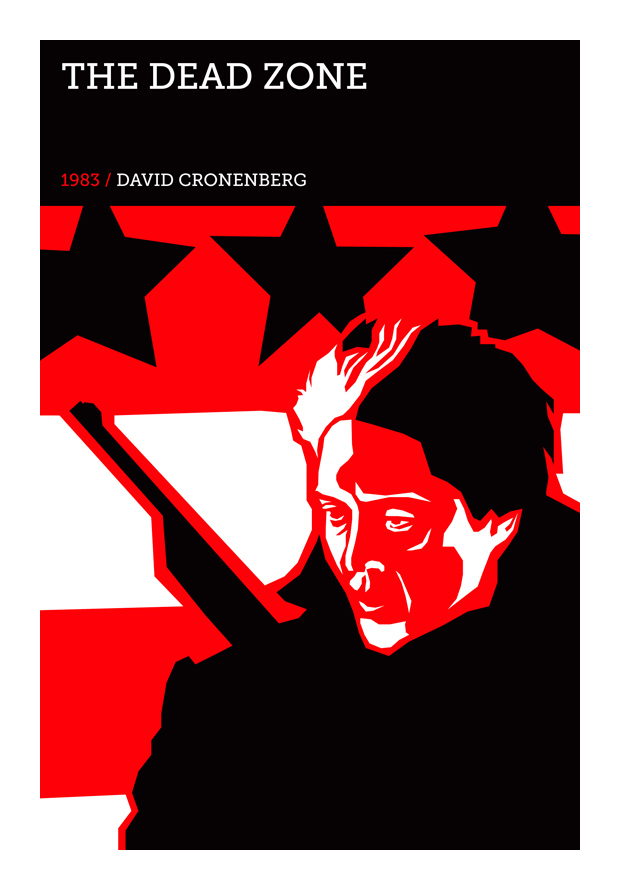 Arguably the best of the Stephen King adaptations to film, this supernatural thriller does what so many don’t: it makes us care.

A high school teacher, Johnny Smith, in love and living a rewarding life is caught in a terrible accident, placing him in a coma for 5 years. When he awakens, he finds that he can see the future by touching the hands of others. The drama of the piece comes in Walken choosing to change that future and it’s implications for humanity or in ignoring it.

David Cronenberg, the man who has given us so many indelible horror images throughout his career shows great restraint with the material here, eschewing any gore for real storytelling.

Truly thrilling, this is definitely a gem from the early 80’s. Definitely worth a watch.

Pure trash. Pure fun. Thought I had seen this before, how cool was it to see this MANY years later as an “adult?”

Made by Troma, the studio that brought you “The Toxic Avenger,” the filmmakers had this to say about the film: “It’s like The Breakfast Club, only not as stupid, and really, really drunk.” I definitely agree that stupid and drunk should be in any description of this film. But uproarious, splattered and kitschy should be in there somewhere as well.

Welcome to Tromaville,  where square teachers, righteous dudes and violent surf punks fight for the school and life is one big nihilistic party. The local nuclear power plant is leeching green goo into just about everything. What happens when that goo gets in the water, or even more dire, the marijuana supply? Well, you might guess. The answer involves toilet monsters, zombie-like pregnancies, 4 foot long erections, man-eating slime-things and a whole host of low-budget 80’s incredible-ness.

The casting is fun all around. Gil Brenton anchors the male lead role well. Robert Pritchard plays a memorable arch-punk as the main villain with the support of a motley bunch of bizarre flunkys in his anarchic gang. Perhaps the most interesting is the fresh and radiantly sexy Janelle Brady as the ever-prissy Chrissy. As a 16-year-old male when this film came out, I can say that Chrissy made my horror-loving heart beat QUITE quickly. She’s truly gorgeous. It’s a shame that Brady’s career only lasted for three films.

This movie is the definition of trash. However, the film’s hilarious “badness” has an undeniable charm. Is this a good film? Not on any planet. Is it a cult-classic? Yes and awesomely so. See it, but ONLY if you’re up for what it has to offer.

A deranged dollmaker with a consuming fear of being alone devises a way to shrink humans to keep them in his doll collection. Light and a bit goofy, this classic title from the late 50s relies on set pieces and trompe l’oeil effects to generate interest. Though the effects are fun and quite successful at times (for the era) and I do consider early technique-driven films like this classic matinee fare, the film remains tepid.

Worth watching for completists and early effects fans.

I will continue to post catch-up reviews as I go. Stay tuned!