With each review, I am also sharing minimalist movie posters I have created for every film after watching it. ( More on my film poster project at large, here. ) 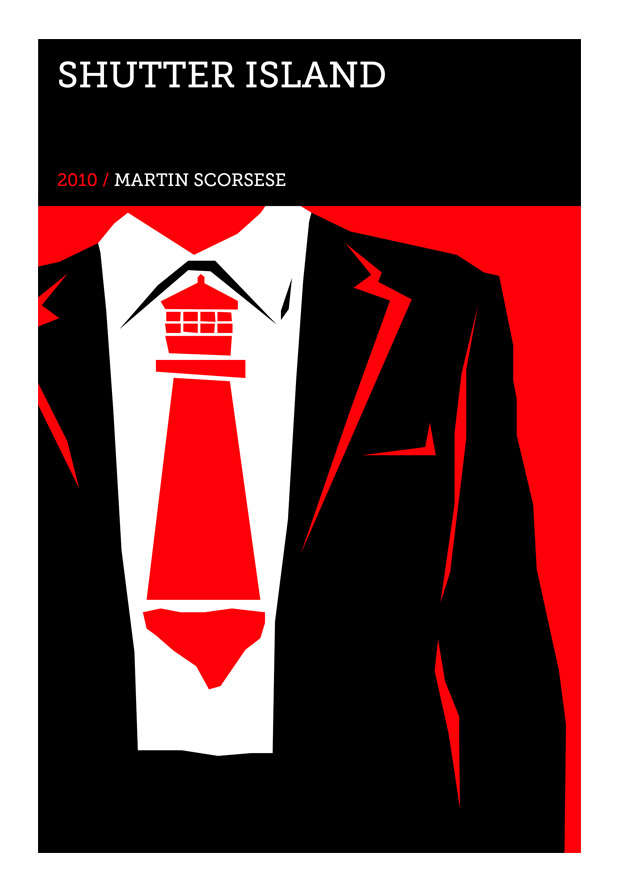 But… Mike LaFontaine? In a “Shutter Island” review? What happened?

I have been told may times over the years that, like Mr. LaFontaine, I have a signature phrase. Or more specifically, many of them. One person told me that “IT IS WHAT IT IS” would be on my tombstone. I have also been told “NOICE,” “THAT’S NOT IDEAL,” and so many others are my “thing.” In all honesty, I have mixed feelings about all of those.

One phrase, however, has come up consistently and it is something truly ownable. Something that I do proudly accept as my own and in the sitcom that I call “life,” it is one I keep returning to… “I WANT TO LIKE IT MORE THAN I DO.” Others that I have known have co-opted it and used it freely, invoking my name with each use. It’s an odd one, but really, so damned useful.

Why? The phrase is so useful because it says that there’s a lot to like about what’s being evaluated, but that it comes up short in some way. There are some things that are, or at least should be, working about whatever it is. Some success. BUT, despite that success, it is missing something essential at its core that would inspire me to actually LIKE it. I don’t hate it, but I certainly don’t actually like it either. It’s a nuanced, qualified and even partial dislike in 9 short words. Useful.

Annnd, that brings us to my review of “Shutter Island” and forms the bond with Mike LaFontaine. I really have to invoke my catchphrase on this one… “I WANT TO LIKE IT MORE THAN I DO.”

I found myself saying that several times while I watched this film.

There’s no question that Scorsese is doing his best Hitchcock impression here and it’s a solid one. He handles the material with a sure hand, leading us through the story’s twists with a careful, deliberate touch. It does work… And though we’re not really getting Hitch, it’s a pretty reasonable facsimile.

The film is also well cast. Top to bottom, this is an immensely talented group that clearly know their craft. DiCaprio is obviously at the center of this group and he too seems to be attempting to pay tribute to the Hitchcock greats, conjuring echoes of Jimmy Stewart in his legendary Hitch roles. Of particular note in the remaining cast are Kingsley, who turns in the film’s most creepy and diabolically successful performance, von Sydow, perfectly suited for his part in the serpentine drama of the film and Williams, who brings a truly beautiful-but-unplugged sense of psychopathy to her turn as Dolores.

Robert Richardson was the DP on “Shutter Island” and his cinematography for the film is immensely successful. The film is gorgeous to watch. The best cinematographers are able to use their skills as a clear storytelling device, making the camera almost like another performer, underscoring and shaping the tale being told through the film. Richardson is able to do that here and it really works so well.

Well… Jeez, Dave… That’s an awful lot to like. So, where does “I WANT TO LIKE IT MORE THAN I DO” come in?

I have mentioned Hitchcock so often in this review because of the obvious homage that this film is to his work — from “Psycho” to “North by Northwest” to “Spellbound” to “Notorious” and “Vertigo” (in a BIG way), there are lifts and nods all over the place. Soooo, it helps to compare “Shutter Island” to its inspiration to see the differences and why I think the film falls a bit short.

It’s about emotional resonance. Though the film is competent on so many levels (even downright masterful on a few), it never really makes us care. When I watch those Hitchcock classics I mentioned, I’m not just a spectator. I am compelled to invest on a passionate, sympathetic level in those stories and charaters. That’s absent here.

The film becomes the beautiful, well-dressed, successful date that just doesn’t stir your heart. It SHOULD work. You SHOULD be head over heels. But you just don’t feel it. There’s no flame.

In all, “I WANT TO LIKE IT MORE THAN I DO.” It’s so unfortunate, because it’s a beautiful, well-cast film. It just didn’t make me care.