With each review, I am also sharing minimalist movie posters I have created for every film after watching it. Like the poster? You can find it at my collected poster site.

In “Nosferatu the Vampyre,” Werner Herzog has given us a gift.

At turns funny, creepy, uncomfy, winsome, campy and lonely, but always beautiful in execution, the film brings us far more than a remake of F.W. Murnau’s seminal 1922 classic. True, there are shots that totally faithfully recreate the genius of the original in tribute to what Herzog has called the finest German film ever made, but it is the quirky emotional soul of this film that makes it so fresh.

Herzog starts with his story. Though he is clearly drawing very heavily from Stoker and Murnau here, he also brings his own masterful additions and touches to the story. This scene, not present in either original story is a wonderful example.

As stunning as it is arresting… and memorable.

That story acts as the bedrock on which the actors build their a-list performances for “Nosferatu.”

The ever-troubled-and-mesmeric Klaus Kinski heads the cast in the role of Count Dracula, giving the film its most hilarious and creepy scenes and acting as the forsaken, isolated soul at the center of the production. This is as good as it gets with a modern vampire performance. I can NOT thank Herzog and Kinski ENOUGH for eschewing the contemporary trend towards sexy or dashing vampire images, started in 1931 with Lugosi. Kinski’s Dracula is a repulsive, manipulative, lonely little creature, living as a parasite and it gives the film a vastly different feel for the better.

The rest of the cast is wonderful as well.

Isabelle Adjani’s performance as Lucy captures so much silent film spirit that is is a joy. Her eyes are worth the price of admission alone! Just look at them here :: 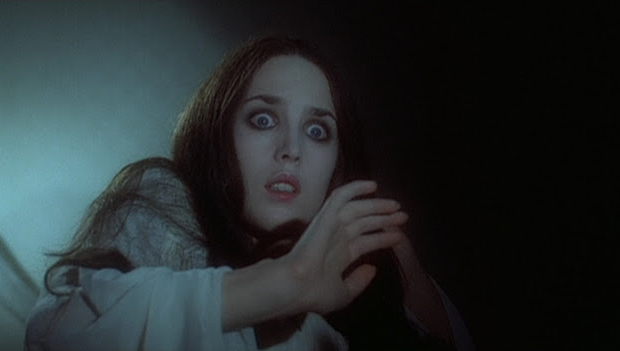 Bruno Ganz also gives us a really fun turn as Jonathan, both as the pining lover and the newly minted vampire.

Also worth a mention is the nutty Roland Topor as a comedic Renfield. Hilarious and zany.

The other thing to mention here is the GORGEOUS cinematography. The land and the city becomes another cast member in “Nosferatu” through Jörg Schmidt-Reitwein’s shots. Filmed in the rugged Tatra Mountains of Slovakia, a weathered Czech castle and the picturesque Netherlands, the film is simply beautiful.

I do have to say in closing that this film is not for everyone. Fans of the debonair vampire myth, the lover with fangs, will likely not get this. For me, that’s just fine. I’ll take my Dracula with extra creeps, please.